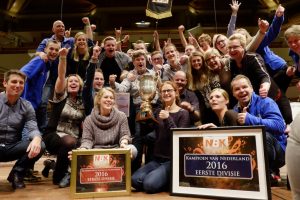 There was also a return to the winner’s enclosure for De Spijkerpakkenband in the First Division as the denim clad ensemble claimed an equally impressive victory under Erik Janssen.

They gave a compelling performance of Etienne Crausaz’s eclectically structured ‘Sinfonietta No 3’, aided by their ‘Best Horn & Flugel Section’ to secure a clear two point margin of victory from Chr. Brassband Excelsior with Oefening en Uitspanning in third.

Once again there was little doubt in the minds of the adjudicators Russell Gray, Reid Gilje and Luc Vertommen over the decisiveness of the victory, with Luc stating that although the overall standard was good they felt only one band clearly mastered the complex structure of the score with its varied themes and motifs.

Meanwhile, speaking to 4BR, MD Erik Janssen was delighted with a victory that further enhanced De Spijkerpakkenband’s reputation as one of the growing forces of Dutch banding.

“This band is growing with every performance,” he said. “We want to compete at the highest level possible and the players all wish to improve together. We have a great atmosphere in the band — one which will be made even better when we celebrate tonight!”