Brass Band Schoonhoven has won the Flemish Open in commanding style in Mechelen on the weekend.

Conducted by Erik Janssen, the Dutch champions beat off a strong quartet of Belgian and German challengers to provide themselves with a timely boost of confidence ahead of their appearance at the De Doelen Hall in May. 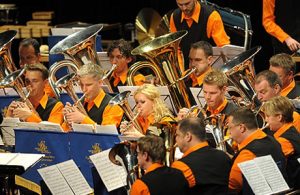 Buizingen had early set a demanding marker to beat under the direction of Luc Vertommen, as they delivered a set that included a thrilling performance of Nigel Clarke’s breathtaking own choice work, ‘When World’s Collide’, inspired by the B movie science fiction films of the 1950s.

Meanwhile, Willebroek showed that they continue to rebuild with growing confidence as Frans Violet led them to a podium finish helped by a solid performance of their own choice selection of ‘Music of the Spheres’.

The adjudication team of Jan Van der Roost, Ian Porthouse and Blaise Héritier was very impressed by the overall standard of playing on show –and not just in the Championship Section event either.

“There was plenty of high class playing all weekend,” Ian Porthouse told 4BR.

“The Championship Section was excellent, with a number of quality performances and some great choices of music. The winners were outstanding—and so well directed.

We really admired the musical approach and the technical execution throughout the entire 30 minute programme. They were pushed all the way though by a number of fine performances on the day.”