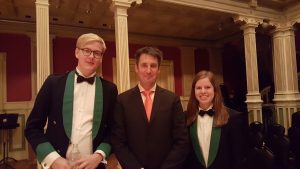 The Norwegian banding giants of Eikanger Bjorsvik and Manger Musikklag put their traditional contesting rivalry behind them recently to join forces under the baton of Dutch conductor Erik Janssen for a high profile celebration concert in Bergen.

The event at the Grieghallen marked the 40th anniversary of the Statoil company’s huge Mongstad oil location in Hordaland which first opened in 1975 and featured both individual and combined items from the two former European champions.

Also featured were local pianist Frode Skag Storheim and opera singer Lydia Hoen Tjore, who elegantly floated on top of the massed band sounds during the epic finale entitled, ‘Nade’ (Grace), whilst some highly energetic break-dancers also joined in the music making in their inimitable way (above).

The concert was the culmination of a busy week for Erik Jansen — but one he thoroughly enjoyed, as he told 4BR. 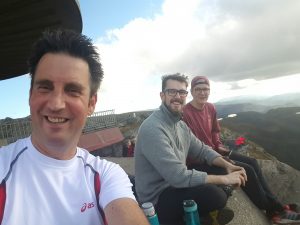 “The massed band programme with Manger and Eikanger was a great experience. I really felt privileged, as I was told it was the first time in many years that something like this has happened in Bergen.

It was good to hear two such brilliant bands playing together — all with friendly rivalry! The standing ovation felt wonderful!”

The following day Erik also led the massed band concert of Manger Musikklag and Sandvikens Ungdomskorps, a wind band from Bergen, to round off a memorable trip in fine musical style.

Erik added: “This was my second trip to Manger this year, and both have been so enjoyable. It’s great to work with this really young and committed band.